Rudi watched through the window as the kids outside ran this way and that, some chasing a football, others throwing a rugby ball. Some sat beneath the trees, talking. A teacher was dotted here and there, and he saw small teams of Prefects moving in and out of the groups.

“Are you listening to me?”

Rudi looked back from the window. The Principal, Mr. Dearing, was leaning forward in his chair, studying Rudi from across his desk.

“I asked you a question,” continued Mr. Dearing.

Mr. Dearing sighed. He stretched his arms out and leaned back in his chair.

“Look,” he said, rubbing his temples. “Look. Nothing like this has happened before. You don’t strike me as the kind of kid who picks fights. Hell, I KNOW you’re not that kid. So what happened?”

Rudi clenched and unclenched his right fist. The outside knuckles were sore, probably bruised. The ice pack that the school nurse had brought in was helping. He turned his head to look out of the window again.

Mr. Dearing stood and came around his desk. He strode over to the window and closed the blinds. Instead of taking his seat again, he perched on the edge of the desk, looking down at Rudi. His suit jacket was off, tie loosened, and sleeves rolled up to just above the elbow. Rudi saw the faint and faded outline of an old tattoo peeking out. He didn’t figure Mr. Dearing for the tattoo sort.

He glanced at the thin folder that has now held out towards him. He reached out for it but Mr. Dearing pulled it back.

“Know what this is?” asked Mr. Dearing.

Mr. Dearing stared at him for a moment, then licked a finger and opened the folder.

“This,” he said, “is the sum total of your time with us at this school. It has everything you’ve ever done. Let’s take a look.”

Mr. Dearing looked at one page, then turned it and scanned another.

“Army kid, I see. Older sister, also with us. Not particular active as far as activities go, though your baseball coach has noted that you’re an integral part of the team and a genuine asset.”

He turned another page.

“Let’s see: academics. Marks are so-so. Not a high-flyer, certainly not the top of any particular subject. Seem to have an aptitude for History. Your teachers…” he turned another page, “…have nothing but good things to say. Seems you’re quiet, pleasant enough, good with team activities and on your own, small group of friends. You get your work done, no parent-teacher conferences have been called. You do tend to be a bit of a daydreamer but what boy isn’t, at your age. Bet you’d rather be kicking something around than sitting for hours in a chair, right?”

“See how thin this is?” said Mr. Dearing, holding the now-closed folder out again.

“That’s because there is nothing to report, young man. Nothing to report. Nothing I see in this gives me the slightest inkling – not one small bit of info – as to what would cause an otherwise regular boy (and I use the term respectfully) to punch a bigger boy in the face during lunch. Not just punch, mind you, but floor, if the reports are correct.”

“In fact,” he continued, putting the folder down and crossing around back to his seat, “if the reports are correct, you were carrying on like a banshee and would likely not have stopped after just one punch.”

He paused, his fingers now linked on the desk in front of him. Rudi looked over at the window again, only the filtered light of the early afternoon coming through the blinds.

Rudi looked back at him.

“The file we have on the guy whose head you tried to take off. Between you and me, you didn’t start this. So how about you open up and fill me in?”

It was now Rudi’s turn to rub his temples. He put one hand to his left ear, still smarting from the slap. Mr. Dearing leaned back in his chair and watched Rudi, just waiting.

After what seemed to Rudi like an eternity, Mr. Dearing cleared his throat.

“Always like this, you know,” he said, “and I get it on more levels than you’d appreciate. You don’t want to say anything because you think it’s snitching. You’d rather take the punishment than paint a target on your head. Do I have that right?”

Rudi looked up at Mr. Dearing but said nothing.

“Yes, I see I have that right. Do you know what the school policy is on fighting?”

“No one ever reads the handbook,” said Mr. Dearing, almost sadly. “Well, two things are going to happen immediately, following our chat.”

The Flat Earth Club, Book Two in the Rudi and Raven Series, will be out soon. I hope you’re looking as forward to it as I am.

My name is Adrian… 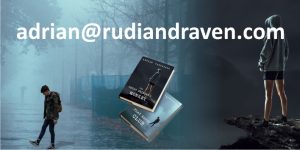